When working with serverless SQL Pools, reducing the amount of data read reduces the cost of the overall solution. In today’s post, we will be testing out what happens to the amount of data processed depending on column selection & column filters.

For these tests I have prepped the taxi dataset in two ways.

Testing the amount of data read with serverless SQL Pools

I will start off by writing a query showing the distinct amount of PULocationID in total and by file for both datasets. 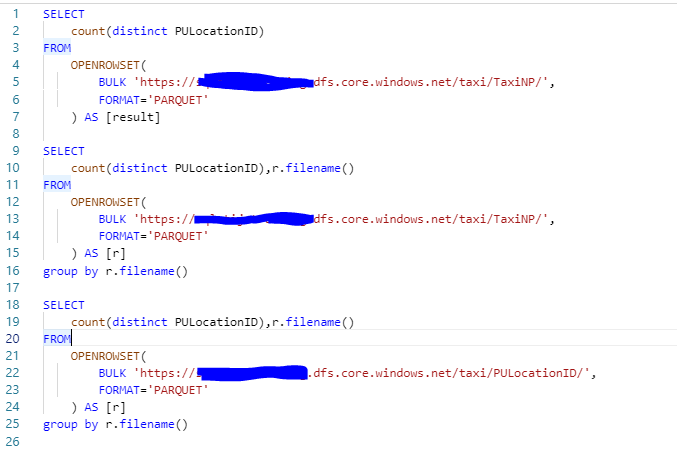 When checking the results, we see that we have 266 distinct PULocationID’s

We proceed by creating two views, one for the TAXINP folder and one for the PULOCATIONID folder

The first test: All columns vs Limited amount of columns

The first test we will be doing is an obvious one, what happens if we select all columns of the view compared to a single column. We expect that the amount of data read when selecting fewer columns should be less than when selecting all columns.

The second test: filtering the data with a where clause

For the second test we need to have a bit more context, I have created my PULocationID view dataset based on files that are ordered by PULocationID. This means that files will contain only the rows of a certain set of PULocationID’s.

If we read from the view and list the filename with it using the filename() function of openrowset, we can see that one file contains all values for PULocationID 2 and 3

This code will list the metadata of the parquet file, as you can see we have two row groups, if we dive a bit deeper and check the column chunks for each one of these row groups(using metadata.rowgroup().column()) for the PULocationID column, we see that rowgroup 0 contains the values 2 and 3 and rowgroup 1 contains only value 3. 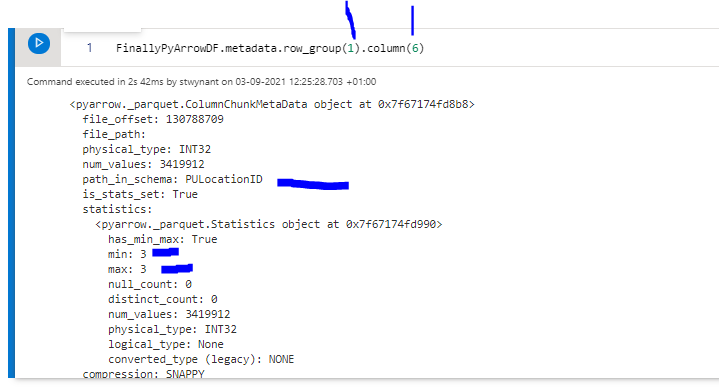 Let’s see what happens when we query the data.

When we query with PULocationID = 3

When we query with PULocationID = 2

We do read less data; this means by filtering on values we also reduce the amount of data read depending on how the row groups are build.

Thank you for reading and stay tuned!